Three weeks ago, a friend bought a toy that is pictured below, for Rory, who is a toy breed dog. 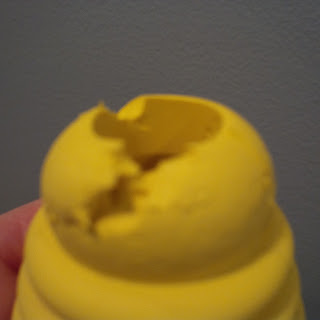 He placed it on the kitchen counter, still in the bag supplied by the store he purchased it from, as he continued to carry in the rest of his packages. Eying it for a moment thinking that it looked pretty solid and well made, because of a similarity to a very popular brand toy known for its tough construction, I pushed it toward the back of the counter waiting for my friend to give it to Rory himself.

Rory’s enthusiasm was boundless. She would not give the toy up even to eat her dinner. The attachment to this new toy was not a normal reaction by any means.

On the second day, she began to tear small pieces off of the toy; which I recovered before she had swallowed them. Rory is a tiny dog! I took the toy away from her and placed it back on the counter in the original packaging and then back into the store’s plastic shopping bag, but realized that there is something more and mildly disturbing about Rory’s attachment to this toy that needed to be shared with my readers.

So, what is embedded in the material of that toy to make the smell so powerful and attractive to a dog that they literally cannot let go of it? How safe could the chemical producing the intense and enticing odor possibly be? BTW, further investigation of the package revealed that this toy was not manufactured in the USA.

Please monitor all toys and chewable items your dog plays with. If their behavior toward the toy seems unusual, follow your instincts about its possible hazardous material content and replace the toy; because you’re probably right.

DON’T MISS OUT ON FREE UPDATES!

END_OF_DOCUMENT_TOKEN_TO_BE_REPLACED

Conversational Dog Training 101. If you’re wondering what that means, don’t bother; I made it[…]

END_OF_DOCUMENT_TOKEN_TO_BE_REPLACED

I was never really good at telling jokes, and I don’t know the punchline to[…]

END_OF_DOCUMENT_TOKEN_TO_BE_REPLACED

It has unfortunately become the norm to don a mask, slip into surgical gloves, and[…]

END_OF_DOCUMENT_TOKEN_TO_BE_REPLACED

Being a good pet parent means being a loving, caring pet parent. Some of this[…]

END_OF_DOCUMENT_TOKEN_TO_BE_REPLACED

Why is MURPHDOG MAGAZINE top-dog?

I’m Jenna Robbins. It’s important that you know who I am, and what makes MURPHDOG MAGAZINE different.

Being a dog lover does not qualify anyone for top-dog status. I achieved this accomplishment by having thirty years of hands-on experience working in multiple dog-related fields.

In addition to my own professional dog training business, I penned a pet advice column for a New York magazine, was asked to teach dog training at Long Island University and audited veterinary medical lectures at the University of Pennsylvania School of Veterinary Medicine further enhancing my experience and knowledge in that field. I’m skilled in the art of dog grooming, conversant about dog nutrition, and trained my own dogs for commercial work. Volunteering at animal shelters as well as providing a nurturing, safe haven to abused and neglected dogs magnified my insight.

I have well established myself within the “canine community” promoting a lifetime of commitment, love, and teaching humans and canines to understand, communicate with, and respect each other.

My passion is to share my expertise and experience with you. My goal is to improve life for dogs and pet parents. My hope is that you share your stories, photos, questions, and comments and enjoy MURPHDOG MAGAZINE.

don’t miss out on free updates!